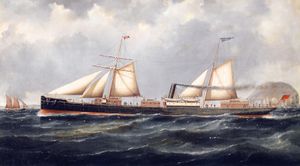 By the late 1870s, China Navigation was looking to extend its reach to Australia, where Swire already had well-established business ties, dating from the Melbourne House experiment of the 1850s. The China to Australia trade – mainly in tea – was still dominated by clipper ships and was clearly ripe or replacement by steam. After several experiments on the line, regular China coast to Australia sailings were inaugurated in 1883 by the three coasters, Taiwan, Woosung and Whampoa. Thereafter, CNCo operated a service between Fuzhou, Hong Kong and Australia, using Changchow, Keelung and Taiwan routed southward via Singapore, the Philippines and Batavia (Java), to Port Darwin, Thursday Island, Cooktown, Brisbane, Sydney and Melbourne. These vessels were supplemented in the tea season by Hoihow and Tamsui. By the 1890s, the tea trade from China had greatly declined – mainly for the reason that China tea had been supplanted in Western tastes by Ceylon and Indian tea. Nevertheless, the initial impetus that this trade had given to the rapid development of an Australian line gave CNCo a solid basis onto which it was later able to build alternative freight. In addition to tea, the main southbound cargoes included Chinese and Japanese rice, general Chinese foodstuffs and, from 1884, refined sugar from the Taikoo Sugar Refinery in Hong Kong. Chinese emigrants were carried steerage in the tween-deck accommodation, as well as saloon-class passengers. Northbound cargoes from Australia were mainly wool, flour, coal and – occasionally – lead and gold bullion; to these was later added raw cane sugar from Queensland, destined for the refinery. Soochow joined the service in 1886. The liner service extended to Japan as required, mainly to load rice. In the 1880s this proved lucrative to the extent that a project to build a rice-cleaning mill at Kobe was at one stage under discussion. The prospective venue was later switched to Hong Kong, but the idea was eventually dropped, with John Swire declaring that the sugar refinery had been his ‘last child’. During 1883-1884, Hoihow, Changchow and Tamsui all made pioneering visits to New Zealand, from whence the main northbound freight was coal. However, arrangements were soon made with the New Zealand Steam Ship Company to handle through-cargoes from Australia and CNCo’s New Zealand trade was not regularised until after World War II. 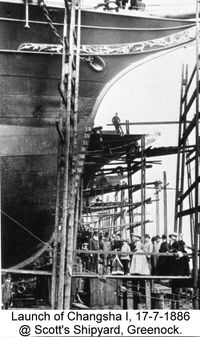 Launch of Changsha 17th July 1886 at Scotts in Greenock

In 1886, the first of a specially designed class of Australia passenger/cargo liners was completed by Scotts’ of Greenock, entering the trade in the following year. At 2,269 deadweight tonnes, they were around half as big again as any of CNCo’s existing vessels – a considerable commitment, bearing in mind they would be unsuitable for redeployment on the China coast in the event that the line folded; John Swire admitted he signed the order for their construction ‘in fear and trembling’. In fact the timing of the Scotts’ order was hastened by the loss of two of the company’s ex-coast Australia liners within a fortnight of each other in 1884.

Changsha and her sisters Taiyuan, Chingtu and Tsinan, formed arguably the most elegant class of ships ever built for CNCo and were immensely popular with saloon-class passengers, Swire’s Melbourne agent writing in 1890 that ‘In the season, their passenger accommodation could be filled twice over’. But in terms of the steerage↵class, emigrant passengers they were also designed to carry, they would not be as lastingly useful, since the Australian Colonies banned further Chinese immigration from 1888. They also proved less than profitable in terms of their freight earnings, with competition from “tramp” operators keeping freight rates low, and the hostility of Australian waterfront labour to Chinese-crewed ships effectively placing an embargo on CNCo carrying freight between Australian ports. 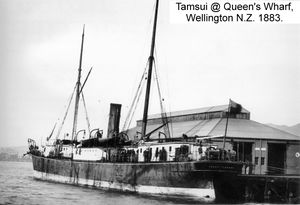 Tamsui at Queen's Wharf, Wellington in 1883

By 1899, CNCo was serving East Australian ports round to Adelaide (to load wheat) with the four sisters; Darwin was also a frequent port of call, as an extension to its Batavian service. In the same year, John Swire & Sons formed a partnership with the Australian firm of G.S. Yuill to develop a cold store at Manila. George Yuill, a former Butterfield & Swire clerk and brother-in-law of the firm’s newly- appointed Senior Partner, James Scott, had established a joint venture with the Manila house of Smith Bell & Co. to supply frozen meat from Australia to American military personnel stationed on Luzon following the US invasion of the Philippines in 1898. China Navigation was contracted to supply refrigerated space from Sydney to Manila at one penny per pound, and two of the four big “Australians”, Changsha and Taiyuan, were re-engined and converted to carry refrigerated cargo; they were ready for service by 1900. G.S. Yuill was meanwhile appointed agent for CNCo at Sydney, Newcastle and Melbourne.

Despite this fillip to the trade, Australian tariffs on the import of sugar and rice (mirrored by similar restrictions in Japan, at the other end of the service), had seriously depleted the line’s earnings. It was reduced to two ships in 1907, when Tsinan and Chingtu were transferred to a Shanghai-Japan only service; in 1909, these vessels were sold to a Norwegian buyer. In 1912, the Australian Navigation Act came into force giving statutory weight to the union ban that already prevented CNCo from carrying passengers and freight between Australian ports and on the expiry of their Philippine meat contract, Changsha and Taiyuan were sold to Swire’s agent, Yuill’s – at a cost of £7,000 apiece. Keeping their original names, the sisters formed the basis for Yuill’s new Australian-Oriental Line, which they continued to run as a two-ship service until 1925, clocking up 38 years in this trade. CNCo meanwhile withdrew from Australia until after World War II.

The Australian service was the first true departure from CNCo’s “home base”, that is: the coast and especially the northern trades appended to the Tianjin and Yingkou services. But from the late 1870s, additional berths on southern “open” trades were also covered on a speculative and to a great extent seasonal basis by its coasters. For example, a winter Xiamen-Hong Kong-Manila service was added during Tianjin’s ice-bound season, and an occasional Shantou-Bangkok service was also in operation by the early 1880s, via Indo-China (Vietnamese) ports and Hainan. Bangkok was however an infrequent port of call before CNCo acquired a stake in the timber trade in 1890 and this extension was not really covered on a liner basis until after the 1914-1918 war.

From the late 1880s, CNCo carried raw cane sugar for the Taikoo Sugar Refinery from the Philippines and the Dutch East Indies. The problem now arose that whilst CNCo’s existing tonnage was too small for the Java “raws” trade, the company was reluctant to tie up capital in vessels which would be – for size – unsuitable for use on the coast. The solution was for Taikoo to supplement CNCo’s fleet with two dedicated sugar carriers of a little under 3,000 tons gross: Hupeh (1891-1899) and Shantung (1892-1912), which were commissioned from Scotts’ for the refinery’s own account. From 1890, this service was pursued on a pool and sometimes partnership basis with Jardines, for their own sugar refinery and also with the local China-Manila SSCo. Shantung was eventually replaced in 1919 by the larger Taikoo Wan Yi, purchased by the refinery from Raylton Dixon & Co. of Middlesbrough, where she had been laid down for war use; Hupeh was wrecked in 1899.

By the early years of the 20th century, these southern trades were still comparatively small-scale, with the Hong Kong office managing an average of five ships – not including the Australian liners and the Pearl River trade – out of a fleet of more than 60 ships.

Butterfield & Swire had many years’ experience in the southern emigrant services from both Shantou and Xiamen to the Malay Straits, in its capacity as agent for Blue Funnel, Scottish Oriental and (latterly) Nord Deutscher Lloyd, all of whom, at various times, operated in this trade. B&S’s Chinese compradors were responsible for passenger broking for these companies at the two coast ports, through their “coolie hongs”, Taikoo Nam Kee and Taikoo Tien Kee.

An interesting side issue of Swire’s business at Shantou – where the firm had an office to handle Blue Funnel’s affairs and CNCo’s beancaking service from 1882 – was that for a number of years it produced its own “banknotes” for use at this port. With no banking facilities to hand, these were effectively glorified promissory notes, which could be exchanged for silver dollars of the day. To deter fraud, they were printed in London by currency and postage stamp engraver, Waterlow & Sons and were printed with the emblem of the Taikoo Tsng, or Swire Bank. They remained in circulation for many years and were still being honoured into the 1930s.

Ocean withdrew its so-called “coasting Blue Funnels” from Shantou-Straits during the 1880s and had to a great extent pulled out of the Xiamen-Straits trade by 1904. However, despite early CNCo experiments on the Straits berth, regular liner involvement from Shantou did not commence until NDL had been forced out of the trade by the outbreak of the 1914 war; Xiamen was added in 1921.This trade, carrying mainly indentured labour, remained viable until 1949.

The effects of the 1914-1918 war were particularly apparent in the north, where the German port of Qingdao was besieged and taken by the Japanese. Somewhat vague restrictions on “trading with the enemy” were also brought into play – although it was a while before these began to take effect. To the south, danger from a hostile German naval presence, (most famously, from the Emden, which had been detailed into the South China Sea), was not assisted by floating staff shortages and an officers’ strike over pay in 1915.

Latterly, the requisition of a number of the company’s ships for transport work in the Mediterranean and Persian Gulf caused a severe shortage of tonnage in the southern trades, (Hong Kong registered competitors escaped this requirement). With the loss of four requisitioned coasters, including Anhui (1904-1918), which had been on the Straits berth and Kalgan (1895-1918), which had covered Shantou-Haiphong-Saigon-Bangkok, CNCo entered the post-World War I period under-tonnaged, but – with freight booming – essentially “cash rich” (though with a sizeable tax liability).

This situation promoted a brisk new building programme between 1920-1930, which produced four new “A” class vessels specifically for the Singapore service and a total of eight “K”s to cover the other berths. This entire “southern” series – with the exception of the last two “A”s – was turbine-engined, which was a new departure for CNCo.