John Taylor joined CNCo in June 1920 at the age of 24. He was promoted to Chief Officer eight months later in February 1921 and obtained his Master's certificate (No. 4018 in Hong Kong) 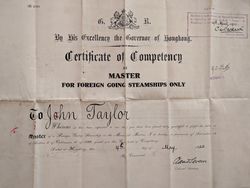 in May 1922 at just shy of 26 years of age. Taylor had to wait until July 1928 before a suitable vacancy arose and he was promoted to Master. There is no record within the CNCo archives of Captain Taylor's first command but in February 1929 he was master of the Siangtan operating on the upper reaches of the Yangtse and the Tungting Lakes.


Captain Taylor's final command prior to his retirement in January 1956, after 36 years of service with CNCo, was the Anking II. The "Anking" was five times the size of his earlier river commands and was employed on the Hadj service helping Malaysian pilgrims on their journey to Mecca.