Jan 15th. 1936. Delivered to the Britsh India Steam Navigation Co as a permanent troopship, named Dilwara(II), a sister of the ship Dunera(II).

April 1941. Involved in the Greek evacuation at Kalmata.

1942. Converted into a Landing Ship Infantry (Light) - LSI(L) with 10 craft. In Sept 1942 took part in the preventative occupation of Madagascar.

July 1943. Involved in the coastal invasions of Burma, and suffered damage by mines.

1956. Took part in the Anglo-French force which landed in the Suez Canal zone, following the political nationalisation of the canal.

Oct. 1960. The ship became redundant as a troopship due to the growth of the rapid and cheaper cost of troop transport by aircraft. Bought by John Swire & Sons, to be employed as a cruise ship and for the pilgrim trade.


On arrival at Taikoo Dockyard, it was discovered that there was a bulk wine tank which was far from empty. However the contents were pumped into he harbour, in order to avoid paying a Hong Kong customs duty which would have applied when the vessel was decommissioned.

Dec 1st. 1971. Arrived at Kaohsiung for scrapping by the Tung Cheng Steel Co.

Dilwara was completed by Barclay Curle in January 1936 – the first purpose-built British troopship since the 1860s. She was owned and managed by the British India Steam Navigation Co, on behalf of the UK Government.


During most of World War II, she served as a Landing Ship Infantry, with LCAs (Landing Craft Assaults) in the davits. She was present at the evacuation of Greece in 1941, the landings at Madagascar in 1942, Sicily in 1943, the South of France in 1944 and took part in the Burma/Malaya campaign in 1945. Her Commander, Captain F.L. Sampson, was awarded the DSC and a number of the ship’s company decorated, after she was severely dive-bombed in the evacuation of Greece. Luckily she suffered only minor damage at the time, but was later mined off the coast of Burma. Thereafter, she operated between the UK, Middle and Far East, took part in the Korean campaign in the early 1950s and was involved in the Suez crisis.


Acquiring Dilwara in November 1960, China Navigation announced in a bulletin to its floating staff:
‘We have bought the twin-screw motor ship Dilwara from British India SNCo and intend to rename her Kuala Lumpur. She will carry Malay pilgrims to Jeddah and back for eight months in the year and for the remaining four months will be used for first-class cruising probably out of Fremantle. After considerable refinements and additions, from 1961 all her Malay Pilgrims for the first time in the history of the trade will be accommodated throughout in proper berths. Dilwara will undergo a complete re-equipment at Taikoo Dockyard. Her present first-class cabins will be gutted entirely and new accommodation will be built for about 200 first-class passengers. All these new cabins will be completely air-conditioned, as will all the public rooms, hospital block and officers’ accommodation. In addition a large swimming pool and lido will be installed. Two new generators will be installed; provisions made for the carriage of a band during cruising; additional purifiers will be installed to enable the main engines to run on heavy oil instead of diesel and furnishings and public rooms completely renovated. Emerging as Kuala Lumpur, she will have a service speed of 14 knots. She is equipped with two Doxford engines; and at 12,555 gross registered tons, is easily the largest ship that CNCo have ever owned.’


A later addition was a permanent Mosque.


Kuala Lumpur (the Malaysian Prime Minister, Tungku Abdul Rahman was invited to choose the name) carried more than 50,000 pilgrims over the next ten years. “Kuala Tours” began Japan-Australia cruises in 1961 and in 1964 commenced cruising out of New Zealand, where there was a considerable market – particularly for children’s educational tours.


Kuala Lumpur was scrapped at Kaohsiung in December 1971, after a life of 36 years.

Life Aboard a Pilgrim Ship

View "Life Aboard a Pilgrim Ship as Second Officer" by David R Walker in the Images section below.

Out of Season Cruising

Out of season (August-November), Kuala Lumpur was employed as a cruise vessel between Australia, New Zealand, the South Pacific and Japan. There was a considerable market for educational tours out of New Zealand and the summer schedules usually included schoolboy tours. The Kuala Lumpur's penultimate cruise involved the carriage of New Zealand boy scouts to a scout jamboree in Japan via South Pacific and Far Eastern ports. The master, J.B.H.J. Aldiss, was a key figure in these cruising activities and wrote:


“When, in 1964, I was sent to the Kuala Lumpur as staff master, the first party of 200 New Zealand schoolboys and their 20 accompanying masters had been recruited. It was my job to make the thing work. We did not know it then, but we were taking the first steps in what was later to become the Swire Group's successful "Affiliation Cruise" ventures.


The sturdy Kiwi spirit of "She'll be right" combined splendidly with the cheerful "Can do" of the small staff of dormitory stewards under the leadership of the 2nd steward Johnny Woo.


With a great deal of hard work by everyone, the travel agents, the schoolmasters, the boys themselves and the Kuala Lumpur's wonderful Chinese stewards, the two-inone cruise (the First Class cruise had to go on as usual) was a success. In the years that followed, we ran 5 more schoolboy cruises from Auckland, learning something new with every voyage, from how to extricate a boy from the mechanism of the cathedral clock high above Noumea, to locating Samoan schoolgirls who had climbed through the dormitory portholes in Apia.


In New Zealand, with its relatively small population, and in those days rigid currency controls, group cruising was hard to arrange, which is perhaps why the remarkable O. (for Aussie) James' Returned Serviceman's Pilgrimage of Remembrance was allowed to be embarked on.


James was what is known as a 'colourful character'. Having committed the ship to his hire, CNCo had to sit back and watch whilst he ran out of ex-servicemen and turned his persuasive tongue to such disparate groups as nuns, farmers, a wandering fashion show complete with a stable of females wishing to 'model' around our various ports of call, and many others to raise his hire money. 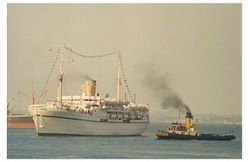 Eventually a social Noah's ark of a cruise left Auckland. Four hundred men and women in cabins and dormitories, all believing they were going on their own particular cruise, some actually had itineraries which included ports off the agreed route. We, the ship, did all that could be done to paper over the gaps and, somehow or another, the old soldiers paraded here, there and everywhere; the boozers boozed, the Sisters of Mercy had much to pray over, and the models displayed their wares. Compering a fashion parade of women's underwear in Honiara's yacht club is one of my more vivid memories.


In 1969 Hong Kong head office turned me loose with a brief to 'go to New Zealand and find group cruises'. I went and after days and nights of calls on every association in the telephone book, undertakers, United Reccabites; Archbishop Liston, the head of the Catholic Church in New Zealand ["a cruise to Fortuna Island, Your Grace, the scene of the martyrdom of St. Peter Chanel" — eventually squashed by the French in Noumea (no customs officers available) and sectarianism in the Sydney office ("a fire hazard, Papists are always lighting candles")] and travel agents, I found the scouts and their energetic national executive officer Jan van Roekel, 'the man in the mocha brown'. I had hit gold. The New Zealand scouts wanted to send a contingent to the 1971 Jamboree in Japan.


The scout cruise was an ambitious project which had to be shepherded at every stage. The Education Department demanded that we set up a school on board: more masters to recruit. We agreed to strange demands to keep up the momentum. The ship had to have the scouts emblem on the funnel. I was to be a National Commissioner and wear scout uniform, thumb sticks, woggles and lemon squeezer hats on the bridge! The reality was a rather drab set of khaki rompers.


For two and a half months we carried eight hundred scouts, and nearly three hundred adult supporters to Japan, by way of New Caledonia and the Solomons, then home again, calling at Taiwan, Hong Kong, Manila, Port Moresby and Cairns. For once we actually made a profit and as usual lost no boys.


This penultimate jaunt of the old Kuala Lumpur overlapped the first voyage of her replacement, the Coral Princess, and for 3 months in 1971, I had the luck to work with the Coral Princess project team setting the new ship up and to assist with selling her first cruises. Thus when the time came for me to leave the Kuala Lumpur in Hong Kong in November 1971 and for someone else to take her to the breakers (we washed her decks down that afternoon, a final grooming for a loyal old horse that has to be shot) one felt that something of what we had learned in New Zealand had been preserved.


In my seven years of cruising out of New Zealand I met thousands of people, but in the years since I have only met one ex-passenger. In Los Angeles in the airport transit lounge a man with a scout badge in his lapel approached me "Are you Captain Aldiss or somebody famous?", he asked. "Both", I replied."