Sister ship of the Sungkiang

This was the first non Scott & Co. new building, as no slipway was available. Only the hull was contracted out. Scott's engined and fitted out the vessel.

April 23rd. 1910. During a voyage from Hong Kong to Ningpo she struck rocks and was wrecked on Little Okseu Island. 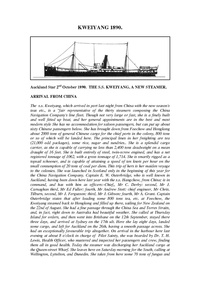 New Zealand newspaper reports of the arrival of Kweiyang from China

A wire from Russell this morning states that a steamer passed Cape Brett at 9 a.m. to-day bound South, in appearance like a Union Company's boat. This vessel, which is in all probability the China tea-steamer Kweiyang, from Foochow and Hong Kong, via Brisbane and Sydney, for Auckland, should therefore arrive here early this evening. The Kweiyang is quite a new boat, the latest addition to the China Navigation Company's fleet. She was launched in the early part of this year from the yard of the London and Glasgow Engineering and Iron Shipbuilding Company (Limited), Govan. She is twin-screw engined on the triple expansion principle, with cylinders of 14 inches, 23 inches, and 37 inches, stroke 30 inches. The steamer is schooner rigged on her two masts, and is 255 feet in length, 36 feet beam, and 21ft 5in in depth..- She is built entirely of steel, and was engined by the builders, Her gross measurement is 1,620 tons, net 1,062 tons. Captain E. W. Outerbridge, who was here last year as commander of the s.s. Whampoa, from China, is in charge of the Kweiyang;. The Kweiyang's cargo for New Zealand comprises 21,590 packages tea, 4,820 bags rice, 1,654 bags sugar, and 3,586 packages Chinese merchandise. From this port the steamer goes South with the balance of her cargo.