Soochow, built by C.N.Co.’s first Yangtze River builders, Inglis of Glasgow, was one of the Company’s last China coasters and became one of the first vessels to participate in the post-war Australian-Oriental joint service, which she joined in 1947. The three Cylinder Doxford main engine was salvaged from a ship which was sunk in the Manchester Ship Canal, during an air raid in WW2.

1960. Suffered an engine breakdown and anchored off Grafton on the N.S.W. coast while awaiting a tow to Brisbane by the steamship "Fukien" which was near by. It wasn't due to flat battery !!

1975. Sold to the Malaysian Shipping Corporation, Penang. her starboard side opening was plated in and the vessel used as a troop ship.

In 1953, after modification at Taikoo Dockyard, Soochow was transferred to the Company’s new N.G.A.L. service, where she was engaged on a fortnightly turnaround from Sydney and Brisbane to Port Moresby and Samarai. In March 1954, Soochow carried N.G.A.L.’s first consignment of copra - although the line did not break Burns Philp’s monopoly of this trade, to carry copra on a regular basis, until the early 1970s. By 1960, Soochow loaded from Melbourne, Sydney and Brisbane for the additional ports of Lae, Madang, Rabaul, Kaviang, and Honiara in the B.I.S.P.

From this time on, Soochow alternated between N.G.A.L. and the Australian “Intermediate” (Japan-Hong Kong-Australia) rota.

Soochow made her last voyage for the Company in June, 1967 - retained to ‘fill in’ for the Australia-Papua New Guinea Service, before the delayed arrival of the newly converted Papuan Chief I. She was then sold to Pacific International Lines of Singapore, and renamed Kota Ratu.

1960, Main Engine breakdown. Terry Connell who was 2nd. Mate at the time, describes the incident, and this is reproduced here by his kind permission. Frank Hindle was Master, J.K.Davies 1st. Mate, Hamish Macdonald Chief Engineer. 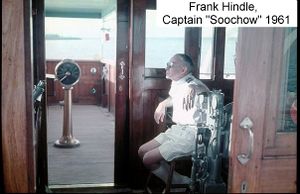 Photo taken by Terry Connell. Regarding the towage of the "Soochow" by the "Fukien", I was only the 2nd.Mate at the time. The hero of the hour was the Chief Mate, and if he reads this perhaps he might contribute and correct any errors. He was not a happy man after having to re-connect the tow just after the Brisbane pilot boarded about midnight. The pilot erred by calling for too much speed too soon apparently. Anyway what happened was this. We had almost finished loading in Sydney so I was doing the usual setting out of our Northbound courses to Brisbane on our well-used chart, which as you will all know are set close to the coast so as to avoid the South setting current which runs strongest along the the 100 fathom line. The chart was so well used that both the previously used North bound and South bound courses were plainly visible in spite of liberal use of a rubber so pencilling them in again was just routine. I had been doing this for almost 2 years. To my astonishment Frank Hindle appeared at my side, and then to my further astonishment took over from me and proceeded to draw a line from the North bound alteration point by Coffs Harbour (now I don't have access to a chart of the coast and Multi maps being only for land lubbers doesn't give me the names of the headlands) to the South bound alteration point, some 12 or more miles off shore from near Brooms Head. (I am looking at a Multi map of the area as I type this). Now what does a humble 2nd.Mate do when the Captain wants to steer an unusual course ? - Point out the error of his ways ? Of course not. I thought to myself, I'll correct this later on. However in the event I didn't and at the appropriate moment the 3rd.Mate altered course to follow the Captain's unusual course. Now comes the amazing part. Normally our North bound course was so close to the shore that the course line passed OVER North Solitary Island and usually we would just make a small alteration to avoid it, SHOULD it happen to be right ahead. Most times it wasn't so we passed by quite close on the port side. This trip though there was no need to do that as were some two miles to the East due to Frank's course. Just as we were coming up to the Island abeam the engine broke down and we came to a stop, dead in the water. The only breeze was very light, maybe force three or even less, from the East. After some time we found ourselves being driven slowly, oh so slowly, directly to the island and it was too deep to anchor. Where was the South going current that should have driven us clear ? At that time of year it was not unusual for the current to be very weak, but for there to be no current was even more unusual. Meanwhile by this time messages were flying through the ether and a tow was being arranged. As we drifted closer the compass confirmed a steady bearing and thoughts of fending ourselves off this rock started to be considered. And then, miracle of miracles, the breeze lightened, and at the same time a trickle of North going current lifted us away from imminent danger. A further miracle weakened the current and increased the breeze so that we slowly drifted shorewards into water shallow enough to anchor. Sighs of relief all round. The rest is humdrum by comparison. The 1st.Mate organized the breaking of the cable after hanging off the port anchor and we all settled down to await the arrival of a tug. Eventually over the horizon came the Fukien, diverted from Brisbane, to come to our aid. With a grand seaman-like manoeuvre she passed down our starboard side causing a cry to be heard from one lady passenger, "What a big tug", rounded our stern and slowly steamed along our port side whilst a flurry of ropes were flung across. The Fukien then went ahead of us and anchored, our intrepid Chief mate connected our chain to her towing wire. For the first time ever, at least when Frank Hindle was in command, the "Soochow" was berthed using tugs ( two in this case).

Captain Frank Hindle collapsed and died on the bridge of Soochow at 07:45 hours 14th March 1965 whilst berthing at Samarai, Papua New Guinea. He suffered his own engine failure; dying of a coronary occlusion at the age of 57. In accordance with his wife's wishes, Captain Hindle was buried at sea the following day, about the 100 Fathom line. The service being attended by the officers, crew and passengers.

In Coral Seas Based on the manuscript by Martin Speyer with additional material by Mike Carolin, Edited by Howard Dick. Describes The History of the New guinea Australia line.

Published by The nautical Association of Australia