Sister of the ship Anking II 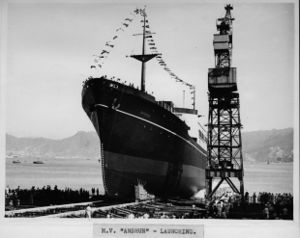 
July 3rd 1955. During the tensions which occurred between Egypt and Israel the ship was fired upon by Egyptian shore batteries at the entrance to the Gulf of Aqaba. The Anshun II was accused of being within Egyptian territorial waters but this was denied. View Hansard record of parliamentary questions below.


Sept 1971. Sold to the Pan-Islamic S.S.Co., Karachi, to be employed in the pilgrimage trade. Renamed Safina-E-Abid.


1979. Ownership transferred/taken over by the Pakistan National Shipping Corporation.


May 26th 1991. Arrived at Gadani Beach, Pakistan for scrapping.

In 1953, the China Navigation Company began to operate a Straits-Jeddah Hadj service, carrying Muslim pilgrims to Mecca. The Hadj trade had become commercially viable in 1869, when the opening of the Suez Canal introduced regular steamer traffic through the Red Sea. China Navigation's ally Blue Funnel, with its weekly Europe-to-Asia sailings, soon became involved in this trade and by the time C.N.Co. inherited the service in the 1950s, had been operating a monopoly Hadj for Malay pilgrims for over seventy-five years. 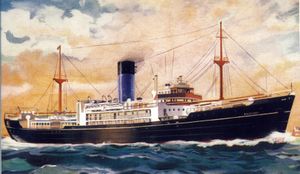 China Navigation's acquisition of the Straits Hadj redressed the loss of the long-standing Straits emigrant trade from South China to Singapore and Penang (which it had also "inherited" from Blue Funnel) and which had been terminated by the Chinese Government in 1949. CNCo inaugurated the new service with the newly built Anking and Anshun - both originally commissioned for the emigrant trade and thus having extensive third class accommodation. Such was the traditional association of the "Serompong Biru" (Blue Funnel) with the Malay Hadj, that the two vessels completed their first pilgrim voyages under Blue Funnel colours, to assure continuity of service.

The Hadj trade was a seasonal one - the annual pilgrimage varying according to Ramadan - and Anking and Anshun found off-season employment in the Australian service, or on charter to the so-called "BPC Recruit”. In 1960 Anking was replaced on the Hadj by the newly acquired Kuala Lumpur - the Taikoo-converted ex-troopship Dilwara - which was employed as a cruise vessel at other times of the year.

The 1950s and 1960s saw continued expansion of the Hadj trade. In addition to the Straits pilgrimage, CNCo made voyages from Akaba, Pakistan and the southern Philippines and in 1966 began a regular service from Borneo and Sarawak. A snippet from CNCo's in-house newsletter of March 1966, gives a flavour of the trade: ‘Resplendent in their green flagged funnels, Kuala Lumpur and Anshun emerged in mid-January from their usual comprehensive conversion dockings. Kuala Lumpur sailed from Singapore for Port Swettenham [Port Klang]on 27th January, after her usual three days’ provisioning and with her first load of 772 Singapore pilgrims. Despite a few anxious moments when the crowd at one stage engulfed controlling officials and crushed barriers at Port Swettenham, embarkations were completed without a hitch and Kuala Lumpur sailed from Penang on schedule on 29th January, only three pilgrims short of her maximum complement of 2,094. Anshun had the extra task of picking up Borneo pilgrims this year. The handling of the vast and colourful crowds which gather at each port to see the pilgrims off is really a major task and the fact that a pattern of prompt sailings has always been achieved is evidence of the very hard work in ensuring that travellers are segregated from well-wishers put in by the agents, local police, the security officials and the ships themselves. However, nothing can be accomplished without the tolerance and good humour of the crowds. The strength of the faith which persuades these people to make the journey to Mecca – the fifth pillar of Islam – cannot fail to move and impress. For most of them, the pilgrimage means the surrender of their lifesavings; many are old and weak and despite the hard work of the ships’ hospitals and the Malaysian mission in Saudi Arabia, a few sadly fail to survive the journey. 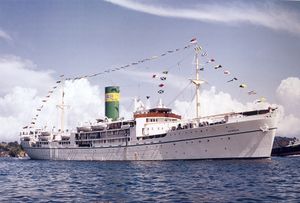 A gradual improvement in the agricultural economy has resulted in an increasing number of Malaysian Moslems being able to afford the pilgrimage and 7,500 applications were received this year – well over the total capacity of 6,560 provided by our two Anshun and two Kuala Lumpur sailings. CNCo undertook to fly the surplus by chartered aircraft. The need to honour our undertaking was tragically avoided, for heavy floods in December and January struck the strong Moslem states of Kelantan and Trengganu [Terengganu] particularly severely and a large number of cancellations were received,spelling out the extent of private loss and disaster. Nevertheless, the 1966 Hadj is the largest CNCo has ever undertaken and over 1,000 more pilgrims are making the journey this year than in 1965. There is every likelihood the numbers will continue to increase steadily in the years to come.’

Despite this optimism, the seaborne Hadj never proved commercially successful for CNCo and by the end of the 1960s was no longer able to compete with the cheaper pilgrim services operated by the airlines. China Navigation finally withdrew from the Hadj in 1970, when the Great Malaysia Line was incorporated to take over the seaborne pilgrim service. Anshun and Anking were sold and Kuala Lumpur went to the breakers.

There is a very fine 1:48 scale model of this ship in the window of Swire House, 59 Buckingham Gate, London.

The following is an extract from Hansard for 6th. July 1955.

Mr. Shinwell (by Private Notice) asked the Secretary of State for Foreign Affairs whether he has any statement to make about the shelling of the SS Anshun by the Egyptians.

Mr. Nutting Yes, Sir At about 5.30 a.m. local time on 3rd July, the British ship SS Anshun was fired upon and hit as it was passing through the Enterprise Channel en route for Aquaba. There were no casualties. The ship, which was on the pilgrim run between Jedda and Aquaba was returning empty northward to Aquaba at the time.

The master has reported that the shot, which struck his ship above the waterline, was fired by an Egyptian battery. He was signalled to stop when he was already abeam of Tiran Island. Because of a headwind and ebb tide and because the ship was light he was unable to make an immediate stop without jeopardising his ship. After the firing of the first shot the master stopped his engines. Two minutes later a further shot was fired and the ship received a hit.

The master was then interrogated by an Egyptian frigate and asked what the ship and cargo were and whether he had any authority to enter through the Channel. About 50 minutes later permission to proceed was granted.

Her Majesty's charge d'affaires in Cairo has been instructed to lodge a vigorous protest with the Egyptian Government for this unwarranted attack and to reserve the right of her Majesty's Government to claim compensation for the damage done.

Mr. Shinwell Are not this and similar acts by the Egyptian authorities quite illegal and a violation of the resolution passed by the United Nations? In view of the activities of the Egyptian Government, may I ask the Minister whether it is still wise to export arms to that country? Ought we not to take a more positive action to prevent Egypt from undertaking escapades of this kind?

Mr Nutting As the right hon. Gentleman knows, Her Majesty's Government, like their predecesors, have never recognised the legality of the Egyptian blockade of the Canel or other waters, such as the Gulf of Aquaba, leading to Israeli ports. As to the policy of arms supplies to Egypt, we endeavour to maintain - so far as lies within our power and having regard to deliveries from other countries - a balance of arms supplies to Middle Easter States. I think that that balance has been fairly well kept in the past.

Mr Shinwell Is it not anomalous that we should export arms to a country engaged in illegal activities which has been condemned by the Foreign Secretary, by the Government and by this House over and over again-- and by the United Nations? Ought we not to take action to prevent Egypt from obtaining arms until that country gains some wisdom in these matters?

Mr. Nutting The export of arms to Egypt is for Egypt's defence. ---( Laughter ) Yes, indeed; it is strictly for its own defence and strictly within the terms of the Tripartite Declaration, to which the the right hon. Gentleman's Government was a signatory. In our view, the export of arms to Egypt does not in any way assist or encourage that country in illegalities of this character.

Mr. Patrick Maitland Is it not the case that the Egyptians are now trying to pretend that they never fired a shot at the ship at all?

Mr. Nutting The Egyptian authorities have said that they did not hit the ship, and they fired a warning shot across her bow. If that be true, the Egyptians must be either poor marksmen or poor observers, or both.

Mr. P. Williams In a Press report of this incident there is a statement that there were pilgims aboard this vessel returning to Aqaba. Is there any truth in this, and if so, were there any casualties ?

Mr. Nutting. No, my hon. Friend will have heard there were no causalities. The ship was returning north to Aqaba and at the time there were no pilgrims on board.