November 29th. 1960. After an apprenticeship and cadetship with Counties Ship Management joined CNCo. on a 2 year Agreement with his 2nd Mate's Certificate of Competence No.88248 issued in London on August 9th 1960.

December 17th. 1960 Standing by the Kuala Lumpur being refurbished at Taikoo Dockyard, prior to joining the Kwangtung II as 3rd Mate on January 6th 1961.

September 18th 1969. Returned from Home Leave, appointed to special duties with the Unit Section, based in Hong Kong.

March 31st. 1991. On the reorganisation of the shipping services between New Zealand and Japan/Hong Kong etc. the New Zealand Unit Express (N.Z.U.E.) ceased to exist after 21 years . Ian Goddard then retired. 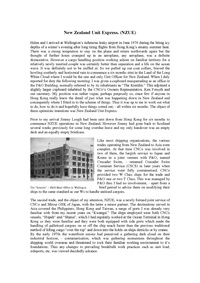