The China Navigation Company first became involved in the Papua New Guinea trade in 1939, when Yunnan took over the copra trade from the German company Nord Deutscher Lloyd, (now Hapag Lloyd) which had been banished from Allied territorial waters by the outbreak of World War II in Europe. In those early days, special boats were carried on board to lift copra directly from the beaches.


Needless to say, this service ceased with the start of the Pacific War, and CNCo did not re-enter the trade until December 1952, when an Australia-Papua New Guinea service was inaugurated as part of a long-term development plan to give the company an Australian base. This trade, together with that to the Solomons and New Hebrides, had previously been monopolised by the Australian line Burns Philp – then the largest operator in New Guinea – which also generated much of the cargo. However, the rapid post-war growth of trade between Australia and PNG made room for an additional carrier.


The new service was given the ponderous title “New Guinea Australia Line of The China Navigation Company”, widely known as NGAL. The general agent in Sydney was G.S. Yuill, (later Swire & Yuill), and the long-established PNG trading group, Steamships Trading Company (today a Swire subsidiary) became CNCo’s agent at ports in the former Territory of Papua, with Colyer Watson acting as agent in the northern ports of New Guinea. (The two territories had been amalgamated under Australian jurisdiction in 1949 – eventually gaining full independence in 1975). Colyer’s was absorbed by Steamships Trading in 1962.

Initially, the post-war “S” class ships Shansi and Sinkiang – originally built as China coasters and still sporting their anti-piracy grilles – were employed on a Sydney-Brisbane-Port Moresby-Samarai-Sydney 28- day turnaround service, later extended to Melbourne. Their sister-ship Soochow was added in mid-1953, after conversion by Taikoo Dockyard to update and extend her saloon passenger accommodation and to fit radar (which neither of her sisters yet had); the other two vessels were similarly upgraded in rotation. This service pattern continued essentially unchanged until 1962 – periodically supplemented by Fukien, a freighter with no passenger certificate and therefore able to make occasional side-trips carrying explosives to the goldmines at Wau or to load timber in New Britain. Another addition was the veteran Pakhoi (launched by Taikoo just prior to the Japanese invasion of Hong Kong in 1941 and known affectionately in the trade as “the packhorse”). Madang, Lae, Kavieng (where the ships tied up stern-first to a palm tree), Honiara and Wewak were regular ports of call. The “S”s also augmented the Hadj vessels on annual British Phosphates Commission charter for the “Recruit” service.


Back-loadings remained disappointing – primarily because Burns Philp’s rights to the southbound copra trade were government-protected – and NGAL’s return cargoes were confined to small amounts of plywood and rubber lifted at PNG ports. By the early 1960s, it was clear the service could not support three vessels and from 1963, the Melbourne-Port Moresby route was covered on a through basis by the “Intermediate Service” vessels, Changsha and Taiyuan, whilst Madang, Rabaul and Lae were eventually ports of call for the “Anticlockwise Round-Australia Service” by CNCo’s “W” class vessels, en route for the Far East. 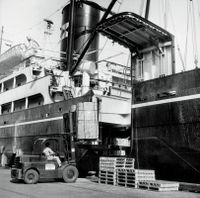 By this time, the shipping industry was going through a period of immense change, with three new cargo-carrying options – all of them potentially offering huge reductions in port time – coming to the fore. These were containerisation, pioneered by the American line, Matson; roll-on, roll-off, and “unit loading” – a concept introduced into the short-sea trades by the Norwegian ship owner, Fred Olsen.


Given the fairly basic cargo handling facilities that existed at island ports, it was the third option, unitisation – the carriage of palletised cargo, worked through cargo doors in the ships’ sides using forklift trucks – which won the day. This system was relatively cheap to implement, since conventional tonnage could be converted, rather than necessitating a whole new building programme, and existing port infrastructure required minimal upgrading.


In 1966, CNCo purchased the 2,224grt Norwegian flag Bahia, which was converted by Taikoo Dockyard in Hong Kong – under extremely trying conditions, during a period of serious rioting. Drastic surgery on the vessel included cutting two large hatches in her port side, fitted with manually-operated cargo doors and adding strengthened tween-decks in the ship’s holds to allow for one-high pallet stowage – necessary to minimise cargo damage in transit and allow deck-to-deck handling by forklifts; the ship carried six of her own forklift trucks.


Though this was pioneering stuff in the Pacific, it is worth noting that side-ports were scarcely a new departure for CNCo and were in fact a feature of pre-war tonnage – with cargo at China coast and Yangtze ports being “walked” out of the holds by the coolie shore gangs. The key to the Fred Olsen design, however, was that it entailed cutting into the weather deck to install the side-port doors – a revolutionary idea for which he obtained the sanction of classification society DNV – and this made them much more efficient than old fashioned side-ports in the hull. 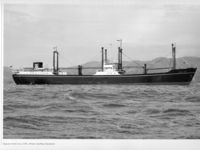 The newly converted ship was named Papuan Chief after an early vessel operated by CNCo’s agent, Steamships Trading, during the 1920s. It was a name that still carried a great deal of goodwill in PNG. Papuan Chief was introduced into the trade in 1967, in her first year of operation lifting an average 2,250 tons per northbound voyage – a slight improvement on the combined performance of Shansi and Soochow. Cargoes into PNG now included rice, sugar and flour from Australia, consumer goods and small trucks, whilst copra was still the main southbound cargo.

Encouraged by this success, China Navigation set about converting a number of other ships to side-port operation. The first of these, in 1968, was the 5,588-tonne Tsingtao, previously employed in the Australia-Japan wool trade. A larger, faster ship than Papuan Chief, Island Chief, as this vessel was renamed, was less suited to pallet work and did not achieve as good productivity rates. Coral Chief (ex-Chekiang), 5,790 tonnes, joined the service in 1969 to replace Papuan Chief, which had been chartered to Burns Philp for their islands trades. There followed Island Chief II (ex-Chefoo) in 1970, and New Guinea Chief (ex-Kwangsi) in 1971 – the latter with deep tanks to carry coconut oil and additional refrigerated space.


In January 1970, after some earlier experiments with PNG crews on Coral Chief, NGAL opened its own training school at Port Moresby to teach basic seamanship skills. Selecting its trainees mainly from the Samarai region in southern Papua, where there was a strong seagoing tradition, the school was an outstanding success and Papuans gradually replaced Chinese crews on NGAL ships. This initiative was part of a general move towards localisation and in September of the same year, the New Guinea Australia Line Pty Limited was registered in Port Moresby – the shares being held equally by Swire and long-time associate, Ocean group; the ships continued to be owned by CNCo, but were chartered and operated by the local company.

For further reading see the book In Coral Seas - The History of the New guinea Australia Line which is based on the manuscript by Martin Speyer, published in 2004, by The Nautical Association of Australia Inc. in association with John Swire & Sons